Do Not Miss Cirque du Soleil: Algria at the Drake Knapp Center 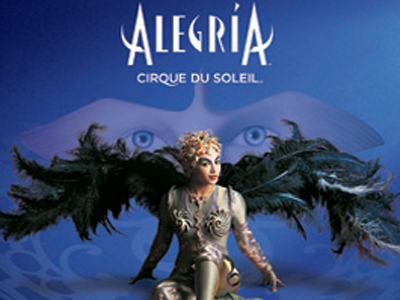 Make sure you do not miss what is sure to result in the most entertaining performance of the year when Cirque du Soleil comes to town to perform its new hit show, Alegria. The exciting show is set to take place at the Drake Knapp Center on the campus of Drake University in Des Moines, Iowa, on Saturday, April 28, 2012, at 8:00 p.m.. The performance runs until midnight, so ensure you are ready for an eventful evening. Tickets range from 70 to 200 dollars and are accessible on a will call basis. Street parking is available nearby the venue.Cirque du Soleil is one of the most popular performance groups in the world. Self-described as “a dramatic mix of circus arts and street entertainment,” Cirque du Soleil got its start in Montreal in 1984 and saw rapid expansion and a large spike in popularity in the 1990s. The talented group has now performed over 25 different uniquely-themed shows that are all derived from a synthesis of circus styles originating throughout the world, each with its own central theme and storyline. Cirque du Soleil has performed on every continent on the globe except for Antarctica, and it is estimated that nearly 100 million people have experienced the group’s shows worldwide.

Cirque du Soleil’s act, Alegria, is a slight departure from the bright atmosphere seen in some of the group’s previous productions. Alegria is Spanish for the word “joy,” and the idea for the show came about during a dinner conversation between the group’s two founders. The production makes use of darker lighting than in many previous shows, and the stage and props use harsh, angular designs to evoke an oppressive feel. Prior to this revival of the show, the group had performed Alegria all around the world prior for 15 years before it was retired in 2009. It was only recently brought back to the stage on the group’s current tour. The music from Alegria remains extremely popular, and the show’s soundtrack is still the best-selling Cirque du Soleil theme to this day.

Cirque du Soleil remains in high demand throughout the world. The group currently performs permanent shows in Las Vegas that draw over 9,000 people each show, and the group is currently planning on creating a permanent show in the same style in Dubai in the United Arab Emirates. Cirque du Soleil continues to develop shows and look into other mediums to expand its influence. The group is the recipient of many different awards for its performances, and it remains one of the most highly acclaimed entertainment acts in the world.

Extremely talented and featuring a wide variety of international influences, Cirque du Soleil creates one of the most unique entertainment experiences in the world. With vivid lighting, stages and props, the group always puts on a stunning display. Make sure you do not miss your opportunity to see the revered performers on April 28 at 8:00 p.m. at the Drake Knapp Center.

Posted by Valley West Inn on March 14, 2012 in Entertainment